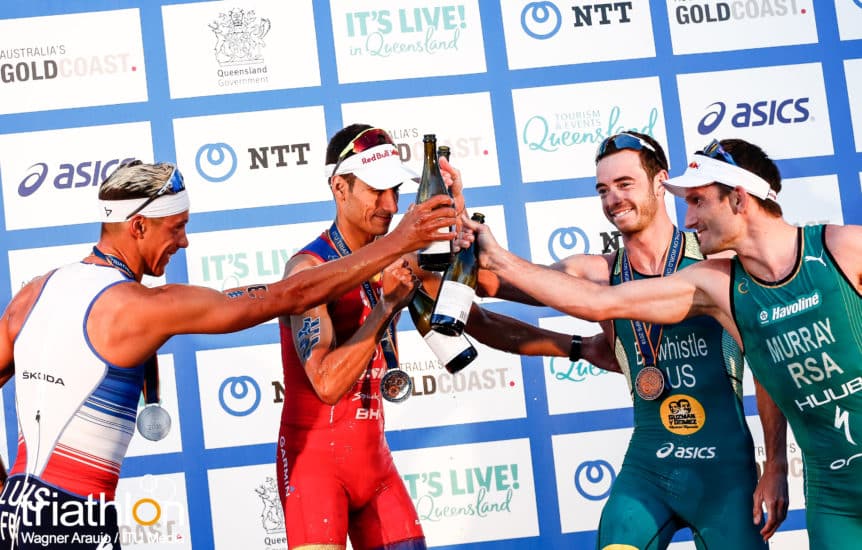 Schoeman was returning to the venue that saw him win Commonwealth gold just five months ago.

Murray told Team SA: ‘It was a crazy race, the wind was pumping at almost 50km/h so in the swim there was a lot of chop and the guys were all over the place, so very challenging.

‘So it all came to the run, but my legs were pretty broken from the ride, where I didn’t get all that much contribution from the other guys and had to take a lot of extra turns on the front.

‘I went on to the run, gave it everything I had and got third so I’m extremely happy with how things turned out.’

Murray ended fourth in the overall rankings. ‘I was so close to third… a bit of a pity but finishing on the podium at world champs is awesome.’

Durban-based Schoeman ended seventh on the rankings, won by Mola.

Now it’s on to the gruelling two-day Super League in Jersey this weekend and that’s the Cape Town-based Olympian’s season done. ‘I’m back in SA on 2 October, looking forward to be home and I’m happy with my overall performance over the season after a tough start.’

The elite women’s race also featured two South Africans but neither Gillian Sanders or Anel Radford were anywhere near to the podium.

London-based Sanders has had a battling season with crashes and health issues and ended 45th in 2:00:26 with Australian-based Radford four places back in 2:03:01.